If you didn’t, worry not—there’s a new resource to help you get a deeper view into the civic life of our great borough and its diverse neighborhoods.

This week, in advance of the election, we released the first report in our new Brooklyn Trends project. Prepared by our research team at the Center for the Study of Brooklyn, it examines civic engagement across Brooklyn—from voter registration and campaign donations, to charitable giving, religious affiliation, Census response rates, and much more—to reveal emerging trends and disparities among our communities.

With this report, we’re hoping to help you become more informed and more empowered to take on the issues critical to Brooklyn’s future.

Here are a few more examples of the data you’ll discover: 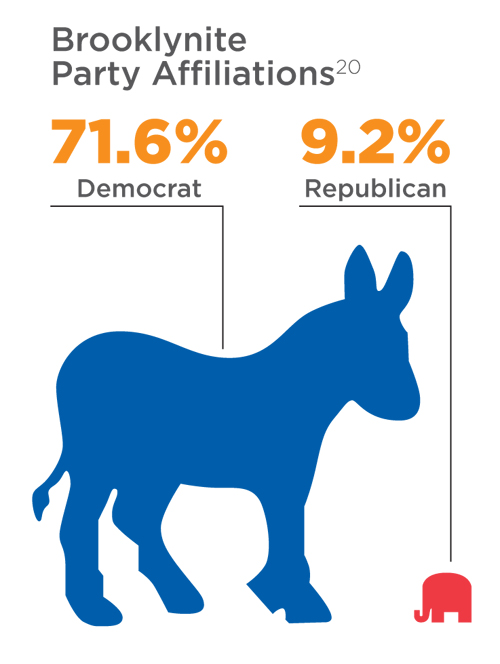 The entire Brooklyn Trends project will consist of nine detailed reports, to examine a broad range of indicators of civic health in our borough. In addition to Civic Engagement, reports will cover Arts and Culture, Demographics, Economy, Environment, Health, Housing, Public Safety, and Youth & Education, and will be released over the next six months.

“Brooklyn Trends elevates our unique borough beyond the sentimental reflections of old Brooklyn and the hipster branding of new Brooklyn. It presents real information about real people—all 2.5 million of us living across 71 distinct neighborhoods. It’s information that can be channeled into immediate action, to bring about positive and substantive change in our borough.”

In addition to empowering residents, the reports are intended to inform and enhance the work of Brooklyn-based community groups, institutions, government, and businesses, and be a ready resource for researchers and media in the borough.

“For me, that’s a huge part of the Foundation’s value—to be a source of knowledge about our borough and to guide donors to areas of need, so that our collective philanthropic resources can have the greatest positive impact in our communities.”

With all that’s happening in our borough, Brooklyn feels like its own “city.” We’re bigger than Boston, Atlanta, and San Francisco combined. And like any city, we deserve our own data and research.

The Brooklyn Community Foundation is making this information widely available, because we know how essential it is to decision-making. We want to make sure that all of Brooklyn's citizens are equipped to play a part in shaping its future and helping it grow stronger throughout.

Election Night in Brooklyn
Join Brooklyn Community Foundation to watch the returns on one of the closest presidential elections on record. We’ll be at Sheep Station in Park Slope (149 Fourth Ave.) with Happy Hour prices all night, special “I Voted” cocktails, trivia, prizes, and much more. RSVP to development@bcfny.org or on our Facebook event page.