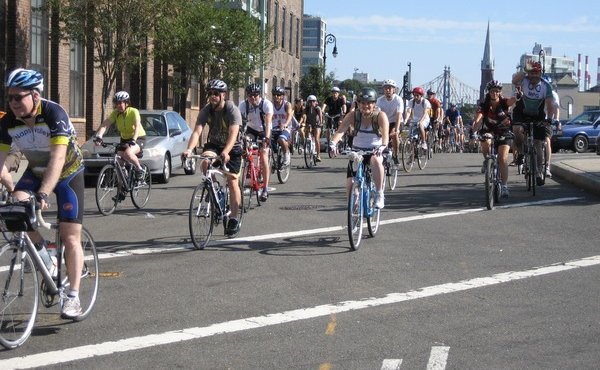 
This Sunday, more than 40,000 runners from around the world will cross through our borough in the 41st annual New York City Marathon, the world's most famous 26.2 mile race, nearly half of which takes place right here in Brooklyn.

But since few of us will ever have the chance (or willpower) to compete in the Marathon, there's a much easier way to see our borough outside the confines of a car, bus, or subway train: the Brooklyn Greenway.

For everyday bikers, joggers and walkers, 14-miles of Brooklyn waterfront from Greenpoint to Sunset Park will be more accessible than ever before thanks to the work of the Brooklyn Greenway Initiative.

The project threads together four regional parks along the waterfront, enabling free access to open space at a time when fewer Brooklynites have money for extras like gym memberships and weekend getaways.

The Brooklyn Community Foundation began our support of the project in 2002, when we gave BGI one of its first grants. The organization now has a list of more than 10,000 supporters, as well as partners in government, private industry, nonprofits and most importantly, in the four community boards along the route, all working to push the project forward.

Subsequent grants from the Brooklyn Community Foundation, including $40,000 this year through our Green Communities Fund, have propelled the Greenway from an idea to a reality. We've contributed toward workshops to gather community input and maps to distribute during grassroots organizing, as well as funds to augment government commitments.

Now BGI is gearing up to transition into the role of stewards of the Greenway. It will coordinate projects, monitor upkeep, and foster economic development along the permanent path, which will begin construction in 2014.

Though much remains in the early stages, Brooklynites already pound the interim paths that have opened, offering a hint of future success.


What's Happening Across Brooklyn
Here are a few highlights of news and events we’ve shared with our followers this week.Don’t miss a thing! Like us at Facebook.com/DoGoodBklyn and follow us at Twitter.com/DoGoodBklyn.


Philanthropy for Small Businesses on BIT's Sector B
Why should small businesses give to their community? How can they make sure their donations will go to good causes? Is it just good business to give? Sector B: Business of Brooklyn host Randy Peers talks to Brooklyn Community Foundation President Marilyn Gelber. Courtesy of Brooklyn Independent Television (BIT), a community media program of BRIC Arts | Media | Bklyn. Watch it here.