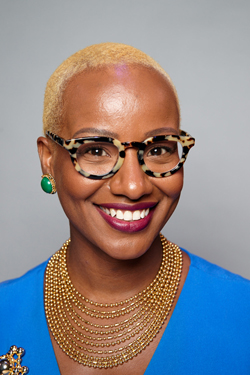 Brooklyn Community Foundation is pleased to announce the addition of Marcella J. Tillett to its staff as the new Vice President of Programs and Partnerships, effective Tuesday, September 3, 2019.
“Marcella has the perfect combination of on the ground activism and service as well as executive management and oversight the Foundation needs to lead its programs team into the future,” said Brooklyn Community Foundation President and CEO Cecilia Clarke. “She brings an impressive array of experience to the position, and we look forward to having her insight and leadership strengthen our partnerships and initiatives as we continue to invest in Brooklyn’s communities to spark lasting, meaningful change in the borough.”
Ms. Tillett is a social justice advocate and practitioner working at the intersections of health, race, and gender. She currently serves as a Vice President at Planned Parenthood of New York City (PPNYC) overseeing Project Street Beat, their unique HIV-prevention, harm reduction, and access-to-care program. She has worked at PPNYC since 2010. She has spent over a decade actively engaged in HIV prevention and access to care and sexual and reproductive justice advocacy through community planning work in NYC and nationally. Ms. Tillett’s work has focused on affirming community needs and priorities during the development of policies, services, and resource allocation, which has included the New York State Ending The Epidemic Women’s Advisory Committee and New York City Sexual and Reproductive Justice Community Engagement Group.  She currently serves as a Board Member of the New York City chapter of the National Association of Social Workers and is an Adjunct Lecturer at Columbia University School of Social Work.
“Brooklyn Community Foundation is providing critical leadership in changing the approach to philanthropy.  I am excited to join this dynamic organization as Vice President of Programs and Partnerships, as the Foundation centers a practice of racial justice and equity that amplifies the expertise of and fundamentally shifts power and resources to the communities it seeks to serve and partner with as the work to strengthen Brooklyn neighborhoods continues,” said Ms. Tillett.
“As a long-time Brooklyn resident, non-profit leader, and service provider, I look forward to forging new partnerships throughout the borough and am committed to being an accountable collaborator with community members from Crown Heights to Coney Island, East New York to Sunset Park, and the many points in between."
Ms. Tillett holds a Master's of Science in Social Work from Columbia University and a Bachelors of Social Work from Clark Atlanta University. She is also a Returned Peace Corps Volunteer, having worked on HIV Prevention of Mother-To-Child Transmission (PMTCT) program development in Botswana from 2004 to 2006. She is also a self-described marathoner, knitter, auntie, and proud Brooklynite.

The Vice President of Programs is responsible for strategic planning for all community leadership initiatives including the Foundations’ grant making, as well as developing a strong advocacy effort to effect change on a more systemic level. Working closely with the Foundation’s staff, a growing Board of Directors, and external partners, she will shape the Foundation’s program strategies and assessment measures, determine staffing and budget allocations, and ensure successful realization of approved program designs. As a member of the Foundation’s senior management team, the Vice President of Programs will work alongside other team members on overall strategy, policymaking, and management, and represent the Foundation in regional and national discussions on effective philanthropy, resident engagement, racial justice, and related issues.

Brooklyn Community Foundation is on a mission to spark lasting social change, mobilizing people, capital, and expertise for a fair and just Brooklyn. It is the first and only public foundation solely dedicated to Brooklyn’s charitable community, working in partnership with generous donors and community leaders to bolster vital nonprofits, strengthen neighborhoods, and increase opportunities for youth. Since its founding in 2009, the Foundation and its donors have provided nearly $40 million in grants to more than 300 nonprofits in Brooklyn and beyond. Learn more at www.BrooklynCommunityFoundation.org.