Today, the National Committee for Responsive Philanthropy (NCRP) announced that Brooklyn Community Foundation, New York Foundation and Open Society Foundations are recipients of the coveted 2015 NCRP Impact Awards for their exemplary grantmaking, commitment to diversity and inclusion, and leadership in addressing critical issues faced by communities in New York and the world.

These foundations, along with San Francisco’s Blue Shield of California Foundation and Ohio’s Needmor Fund, will formally receive the awards at a reception on May 19 in San Francisco.

“I am inspired by the work of Brooklyn Community Foundation, New York Foundation and Open Society Foundations,” said Aaron Dorfman, executive director of NCRP. “The New York metropolitan area is a fertile ground for grassroots organizing, revealing communities that are eager to lead the fight for social justice. These foundations are stepping up as critical partners in these efforts, especially around racial equity, addressing the needs of underserved populations and strengthening our democracy.”

As the country's only independent watchdog of foundations, NCRP inaugurated the annual NCRP Impact Awards in 2013 to honor foundations that embody the ideals of high-impact grantmaking.

More about the 2015 NCRP Impact Awardees: 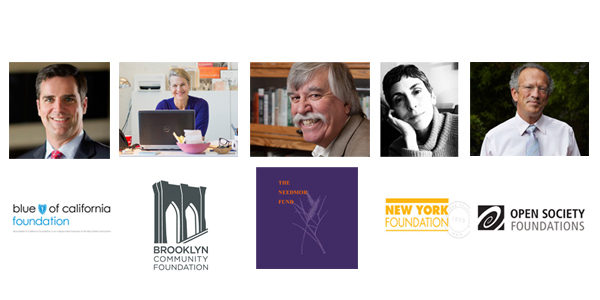 Brooklyn Community Foundation is notable for “Brooklyn Insights,” its 2014 strategic planning process that extensively engaged grantees and community members to identify the best direction for the foundation to take. In response to the feedback the foundation received, Brooklyn Community Foundation drastically changed its operations and grantmaking strategy. It identified five major issue areas of greatest importance to the communities it serves: Neighborhood Cohesion, Youth, Criminal Justice, Immigrant Communities and Racial Justice.

One of the oldest foundations in the country, the New York Foundation has a long history of building the strength of New York’s community organizing groups. It is known for its risk-taking, issuing “start-up grants” to “unproven” organizations before the practice was commonplace. The foundation's grantees have advocated for engaging citizens in public spending, education reform, low-income housing and workers’ rights in New York City. One example is Community Action for Safe Apartments, which ran a successful campaign that forced the Rent Guidelines Board to hold its public hearings in each outer borough, increasing tenant participation in determining annual rent increases for rent-stabilized apartments.

The Open Society Foundations, a family of offices and foundations created by George Soros, seek to build vibrant and tolerant democracies in which governments are accountable to their citizens. Working with local communities in more than 100 countries, the Open Society Foundations support justice and human rights, freedom of expression and access to health care and education. Open Society Foundations have long been a major funder of criminal justice reform in the U.S., and reducing mass incarceration is a major goal. Its 501c4 arm funded Vote Safe, which directed the campaign for Proposition 47, a successful California ballot initiative to reclassify many low-level nonviolent and drug offenses from felonies to misdemeanors.

The state’s largest private funder of domestic violence prevention and services, Blue Shield of California Foundation is also known for its work to make health care accessible for underserved communities in California. In 2014, the foundation launched its Domestic Violence and Health Care Partnerships Initiative, to break the silo between these two often unconnected issues by pairing domestic violence organizations and community health centers. The ultimate goal is to bring about an effective, integrated system of care to families and individuals at risk of experiencing domestic violence.

This small family foundation in Toledo, Ohio is widely recognized in the world of social justice philanthropy. The Needmor Fund invests in multi-issue, membership-based, direct action community organizations that assist low-income communities in fully participating in the democratic process and make decisions affecting their lives. One of its grantees is Communities Creating Opportunities, which ran the Dignity Votes 2014 campaign that engaged thousands of disenfranchised voters in Kansas and Missouri during last year’s elections. The fund is also known for its pioneering adoption of mission-related investing by screening its holdings, participating in shareholder activism and investing in community development funds.

About the 2015 NCRP Impact Awards Reception:

Philanthropists, and foundation and nonprofit leaders will honor this year’s awardees during a cocktail reception on May 19, 2015 at The InterContinental Hotel in San Francisco, California, in conjunction with The Center for Effective Philanthropy 2015 National Conference. This event is open to the media.

Since 1976, the NCRP has served as the voice of nonprofits and the communities they serve in philanthropy. Through research and advocacy, NCRP works to ensure that philanthropy contributes in meaningful ways to the creation of a fair, just and equitable world. Visit www.ncrp.org for more information.