END_OF_DOCUMENT_TOKEN_TO_BE_REPLACED

In this second installment of our interview with Lola C. West, Managing Director of WestFuller Advisors and member of the Foundation’s Spark Prize Committee, we discussed her giving philosophy and her work in community-based philanthropy.

What drives your giving?

I give because it's incumbent on people who have, to give. That's all. People who don’t have that as a thought are somewhat selfish. I give because I can. I’ve not reached the point where I give until it hurts, but I think that to compensate for other people who don't give, sometimes we have to give until it hurts. Because some people just don't think. I often remind people, because I'm a wealth advisor, ‘you know, coffins don't come with pocketbooks--you’re going to leave all that money here, and the government's going to take it. Why do that?’
The whole idea of how to use philanthropy to help people who are not able has always been very important to me. I really acknowledge the Brooklyn Community Foundation for having the forethought, desire, action, to take this project on and give organizations $100,000 of unrestricted funding through the Spark Prize. It’s a lot of money and makes a huge difference for a small nonprofit. 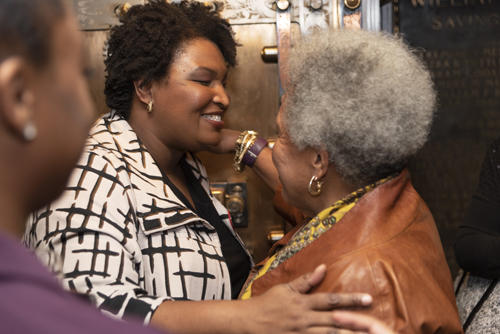 How was your experience as a member of the Spark Prize Committee?

What I got out of being on the Spark Prize Committee was the ability to know about all the programs that are going on in Brooklyn that I really wasn’t aware of, having moved out of the borough in 1994. I did know a lot of the programs, because one of my jobs was as an event producer—I worked with people on Broadway, I got a lot of people in Brooklyn to rent buses and go to the theaters in Manhattan. My first year on the Spark Prize Committee, one of the organizations I got to interview was Bedford Stuyvesant Restoration Corporation , and I worked with them many, many, many, many years ago. So it was just good to be able to participate in the Spark Prize Committee and then listen to how many of the organizations that I knew of were still functioning and adding things to Brooklyn. Like IMPACCT Brooklyn [also known as Pratt Area Community Council], because I owned a brownstone over on Willoughby Avenue. It was really a fulfilling experience, in knowing that Brooklyn is still the best borough to me.
Because there's a different way that people feel about Brooklyn. I remember very clearly when we had the World’s Fair in New York City, and as a kid, I went to see it. Invariably, anytime you were in one of the pavilions and it was a sit-down audience—this must have been a pet question—the host would always ask, ‘what state are you from?’ And every single time, a Brooklynite would say ‘Brooklyn!’ They called it the 51st state for years. The energy of Brooklyn, it's never gone anywhere, and people who live in Brooklyn understand that—so I was happy to participate in the Spark Prize Committee and see the great things that Brooklyn Community Foundation does in Brooklyn.

Are you involved in other types of collaborative, community-based philanthropy?

Yes. I sit on the board of the Donors of Color Network, which is an organization that was started in 2019, and the research began in 2016/17. I'm a wealth advisor, so how philanthropy is distributed is always important to me. Before, I was a fundraiser where I worked with major Black nonprofits around the country. I did most of their fundraising, so I wore that hat. Then I became a financial advisor, and I handle investments in certain small nonprofits and foundations. It's two different hats, so what happens is that philanthropy is always important to me.

One of the arenas where I observed that there really was a dearth of organizations was around people of color and what their giving was. So I participated in some studies where you had to have a million dollars in investable assets, and give 5% away, or thirty million and still give 5% away. My business partner was the first person interviewed for this study about donors of color. When we talk about donors of color, we're talking about all cultures and races other than white. So the study was done on Native Americans, Asians, African Americans, Latinos, Filipinos, people from around the world, because that's who lives in New York, that’s who lives in America. We interviewed 112 people, and of those people, 78% of them were wealth creators, they didn't inherit the money. What we're looking at is what the power in philanthropy is for people of color. So that's what we're doing right now. It's incredibly important to me because by creating the Donors of Color Network what we're doing is having the funds distributed by people of color, in ways that support people of color.

Black Philanthropy Month, celebrated in August, was created in August 2011 by Dr. Jackie Bouvier Copeland and the Pan-African Women's Philanthropy Network (PAWPNet) as an annual, global celebration of African-descent giving.

Development and Communications Associate (She/Her/Hers)
"The energy of Brooklyn, it's never gone anywhere, and people who live in Brooklyn understand that—so I was happy to participate in the Spark Prize Committee and see the great things that Brooklyn Community Foundation does in Brooklyn." - Lola C. West